For child victims of abuse, nothing is more important than a swift response that keeps them safe, addresses their physical injuries and emotional harm, and brings abusers to justice.

Safe Horizon’s Child Advocacy Centers (CACs) are child-friendly facilities where a multidisciplinary team of experts work together to investigate, respond to, and prosecute cases of child sexual and severe physical abuse. This team, based at each CAC includes: child protective staff from the NYC Administration from Children’s Services, detectives from the New York Police Department’s Child Abuse Squad, medical professionals from premier hospitals, Assistant District Attorneys, and mental health and support staff from Safe Horizon. At the Bronx CAC, Lieutenant Michael Donovan serves as the NYPD Commanding Officer of the Bronx Child Abuse Squad. He heads the unit compromised of 15 police officers and 2 sergeants who collect evidence, interview witnesses and subjects, make arrests when appropriate, and help ensure the child and family’s safety.

Throughout his years on the force, Lieutenant Donovan has seen the positive impact the CACs have made in investigating and prosecuting child abuse cases. “The CAC’s integration of all these agencies helps make the cases run smoother, builds the relationship between the staff, and helps keep them united around a common mission.”

A coordinated multidisciplinary team approach includes careful attention to which member of the team will conduct the initial interview with the child, called a forensic interview. These interviews are the cornerstone of a child abuse investigation, and may be the beginning of the road toward safety and healing for many children and families.

Detectives appreciate that children and their impacted family members can get the support and expert services they need at a CAC, promptly and all in one place. “I’m extremely proud of my detectives. They are so attuned to victims’ needs and will give it their all to take a child out of harm’s way and work towards getting them the justice they deserve.”

Lieutenant Donovan: Behind the Badge

Lieutenant Donovan began his career with the NYPD in the 1990s, working out of the 34th precinct in Washington Heights, Manhattan and then became a Sergeant in the Bronx. He decided to transfer to the SVU after investigating multiple child abuse cases. One case he will never forget involved a ten-year-old girl who was home alone and concerned neighbors called the police. She was relieved to confide in someone and tell them about how her mother had been abusing her for so long. “It’s been 20 years, but to this day I remember that girl and how she inspired me to help children everywhere who have been abused.”

A Legacy of Hope for Abused Children

The opening of the Bronx CAC in February 2015, our fifth CAC, was a milestone for both New York City and Safe Horizon’s efforts in fighting child abuse. As he completes his first full year working out of the Bronx CAC, Lieutenant Donovan looks back fondly. “When I was assigned to work at the Bronx CAC it was the first time I experienced such a seamless way child abuse cases were investigated and prosecuted. Between the sergeants, detectives, doctors and social workers and all staff in general, we have an excellent working relationship.” 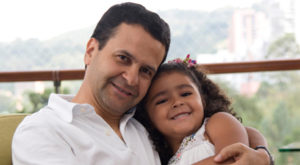 Something happened to Angelica that devastated both her and her father. The support that our Child Advocacy Center staff provided gave Angelica and her dad the chance to heal and form a deep, trusting bond.