Even as violent crime in New York City has been on a steady decline since 1990, domestic violence continues to rise in steady numbers. In 2007, 4.8 percent of all major crimes in the city were related to domestic violence. By 2016, that number had risen to 11.6 percent, according to a report by the New York City Domestic Violence Task Force.

For Councilman Rory Lancman (D-Hillcrest), who is chairman of the City Council’s Committee on Courts and Legal Services, the issue raises questions about the city’s efficacy in handling domestic violence cases in the court system.

“Every act of domestic violence ripples out to affect our city—it leads to homelessness, health problems and hospital visits, police interventions, lost jobs or missed time, not to mention its effect on children’s wellbeing and education,” Lancman said at a Sept. 18 committee hearing on New York’s domestic violence courts. “How our city manages legal proceedings associated with domestic violence plays a major role in determining the services victims receive and how we are able to hold perpetrators accountable.”

At the City Council hearing, however, advocates testified that the IDV courts are often short on resources—especially for services. Judge Esther Morgenstern, the presiding judge of the Kings County IDV Court, testified that there is a “real lacking” of supervised visitation services.

In the second court hearing at the Queens Criminal Court, the issue of supervised visitations came up as the family had been using an advocacy group that provides such visitations for families with children who are affected by domestic violence. The mother of the child was forced to take off from work since supervised visitations were only taking place during work hours.

The lack of supervised visitations is a problem in courts across the board, Lancman said, but presents specific issues for the IDV cases, which typically deal with criminal situations.

“It’s a particular problem in the IDV court,” Lancman said. “With an underlying criminal case, it’s much more likely that visitation will be delivered upon supervision.”

Leah Scondotto, director of the Brooklyn Family Court program at Safe Horizon, which provides supervised visitations, talked to the Queens Tribune about the need of resources for the service. Funding, she said, comes from the state’s Office of Children and Family Services, but it’s limited.

Additionally, less resources makes it harder to create visitation times during the weekends or after work hours.

More resources may be coming. On Oct. 23, New York City First Lady Chirlane McCray announced an initiative known as Create Safe Families NYC, which would provide a network of free supervised visitation resources in each borough. The specifics of that program are yet to be seen.

Serving Those Who Served Our Country 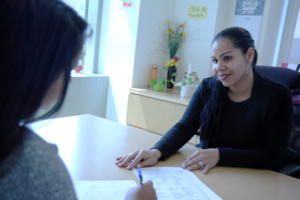 Jackie served in the armed forces, learning how to protect others. But when she experienced domestic violence in her own home, she reached out to our Court Programs for help.